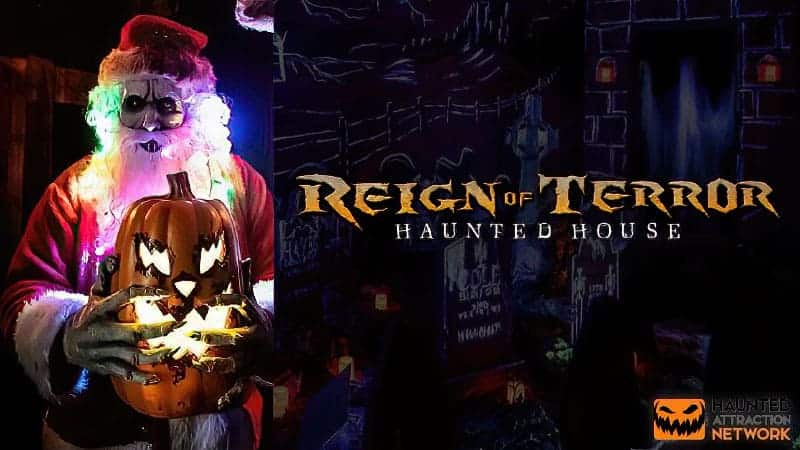 Reign of Terror 2021 is open for two nights to celebrate Ho Ho Horror in December 2021, Friday Dec 17 and Saturday Dec 18 from 7PM to 11PM. Parking is free, a regular admission is only $30 with an option for immediate admission for only an extra $15.  You can buy your tickets online or at the door, at the door purchases are cash only.

How Did the Reign of Terror 2021 Halloween Season Go?

Bruce: So the season went really well, it was extremely busy as we expected it to be because of COVID and the kind of pent-up demand for haunted houses. But we’re going to do a two-day Christmas event right before Christmas, which we look forward to, and I think it’s a very fun event.

Philip: And you mentioned it at the beginning of the season that you were keeping your time ticketing, did that help? What are your thoughts on that?

Bruce: Well, I think the time ticketing makes all the difference in the world, but it really is on somewhat of the honor system. So if you get a ticket from 7:00 to 7:30, we’re not telling you you’re going to get in between 7:00 and 7:30, that’s when you need to show up. As long as people were doing that, which they’ve seemed to do it, then it really does disperse the lines. The lines are huge and they’re still long, and they may get up to an hour, but they don’t get to 2 hours, and that’s really what we wanted to avoid. So, it’s something that worked, and it’s something we will definitely stick with.

Philip: You were in a unique position versus a lot of other haunts because you were fully staffed already before the season started and everybody was vaccinated. So I’m wondering how did staffing play out throughout the season? How did that all end up for you?

Bruce: Well, staffing is a challenge no matter what, and we always get thrown curveballs. We feel we have a very loyal, dedicated staff, maybe more so than others, but we definitely had our share of issues. We get an attrition of people every year. Well, this is really two years, so we had a lot of new actors and it’s hard to explain and train a new actor of what they’re going to experience. You know we started off a little bit slower than we were hoping for in the beginning of September, but we were open earlier than normal. Come October, it was just full throttle, and some of the actors it was a little bit of a challenge for them. I don’t think we really got hit as bad as some of the other haunted houses did, and I think it was a national problem. It was the same thing we’re seeing in restaurants, in dental offices or whatever you’re doing, I mean, staffing is an issue. But haunted house staffing, I think especially for us, it’s a loyal group that’s really doing it because they love it. I mean, they’re getting paid, but they love it. Because we tell our actors, “look we could never pay you enough for what you do. You’ve got to have the passion and love for it.”

Reign of Terror 2021 Most Surprise Challenge

Philip: We’ve already covered a little bit about the demand being high this season, and of course, you were dark for a year, but you mentioned in the first interview, that kind of gives you the opportunity to build out and to refine some of the technical elements of the show. So all that in mind, what was the most surprising thing that you dealt with this season?

Bruce: The most surprising thing we dealt with, hands down, was the behavior of the guests coming through. The etiquette of what people are doing now, and especially in the younger crowds under 18, was very shocking and extremely disappointing. that is one thing that we really are scratching our heads, and it’s really a shame because we build an incredible product and we want people to have a great time, and we expect people that come through are going to have a certain behavior that’s going to allow everybody to have a good time. So, if you come in and you’re obnoxious, you’re not only affecting yourself, which you probably don’t care, but you’re affecting so many people around you, and I think it’s, again, a national problem; I mean, we’re seeing it in the airlines. You know, we’re in Ventura County, we required people to wear masks. I understand people, some people don’t agree with it, we’re just following the rules, and the amount of pushback we got was just extremely disappointing. I hope it’s something that’s a little short-lived. People were cooped up, maybe things will change over time, but that single-handedly, and really nothing other than that. I mean our actors and our the event worked well, and everything we tried to work I think worked great as far as the little details, but the guests. And I mean I’m talking about a small group when you’re putting in thousands of people if you get 5 people, to us it still seems like a big deal, but it was really disappointing. The children of today, the young generation, is very disheartening on how they behave, their lack of respective authority, and I don’t know where they think they’re going to go in the future, because that behavior is absolutely unacceptable.

Philip: It is something we’ve reported on, we report that the airlines, as you mentioned, having a lifetime ban someone. We’ve also reported on several theme parks needing to not allow admission after 9:00 PM, and just a lot of changes security-wise. How do you think that we solve this going forward? Or do you think it’s going to continue to be a problem?

Bruce: Again, I think it’s a little bit of pent-up demand. People don’t really know, kind of how to behave. There’s obviously a bigger divide in the country than I’ve ever seen in my adult life, and I think some things have to change. It has nothing to do with the haunted house business, it just has a way. The reality of it is, and it’s super simple, people just have to have some respect for other people. The world does not revolve around one person and they’ve got to be nicer to each other.

Philip: Do you think there’s anything we specifically could do in our industry to help?

Bruce: I mean I don’t think so, because I think the haunted house industry is kind of a drop in the bucket and it’s a seasonal thing, so it’s kind of hard to manage, but I think it’ll kind of settle for itself. I mean, like you were talking about with checking bags, we’ll probably do more things to make the behavior. One thing I can say is, on a positive note, is we saw less people that were inebriated, we didn’t see that as much as we’ve seen in the past. Like I said, it’s a small group, but when you run this passion that you love, one or two people a night, you know you multiply by every night, it starts getting very… it’s a lot.

Bruce: Well, we’ve really got to kind of wrap our heads around and think about it. You know this is what’s great with the haunt community is, we’ll talk to what other people are doing and mull over different ideas and see what needs to be done. I mean, I don’t know that we need to drastically change anything we’re doing, but it’s something to keep an eye on. We might just have to remove more people or have a tighter policy that just says, “look, we’re not going to warn you multiple times,” and it’ll be unfortunate for them, but you know, sometimes I think you gotta set a little bit of a message.

What Is Planned For Reign of Terror’s Future?

Bruce: For us, technology and kind of the awe factor is what we want to do in 2022. Not necessarily big expansions, not tearing out new sections of putting a bunch of things, we want to do, detailed changes that are really memorable. The Reign of Terror probably has half a dozen things within it, maybe 10, where everyone remembers them and we want to add more of those. So we want to kind of go to the trade show, figure out what the biggest technology is out there, and kind of build that awe factor. We want to scare people, we want people to have a great time, but there’s also a small segment or a segment of the market that comes through that are like your Disneyland fans that are really looking at the detail in the technology, and we want to cater to them. We want everybody to come through. We want that person that says, “I have no interest in a haunted house.” We feel if they come through the Reign of Terror they’re going to say, “that was a cool event,” strictly based on the detail and the set design.

What Is One Piece Of Advice Always Given That Is Just Wrong?

Bruce: Bigger isn’t necessarily better. I think you’ve got to be careful about the value of your haunted house and what you’re charging. I think that’s something that maybe some haunted houses might be kind of pushing the envelope. If you look at the haunted houses in your community and they’re all at X price and yours is half the value, that doesn’t justify you spending the money. When someone comes through the Reign of Terror and they say, “that was worth the money.” We offer an immediate access, it’s a little bit more expensive, it’s not a glorified VIP that’s just taking people money and still giving you them an incredibly long wait. But the immediate access isn’t for anybody, but, for the person that, especially in Los Angeles, that their time and where they’ve got to travel, it provides what they need. I think my biggest thing about a lot of haunted houses is, if you build it they will come is dead wrong. If you put a bunch of garbage together and you expect people to come, you’re going to be in for a rude awakening. And you’ll fool some people, and if you’re in big population markets yet, you’re going to have some people show up, but it does nobody any good. Fortunately for here in Los Angeles, and a lot of areas, barriers to entry are high because of the expenses, but we want to make sure there’s quality events. I mean, I never look at the haunted houses as competitors. I mean when people go to a haunted house they leave, they have a great time, they want to go to another haunted house, and we just want to make sure that they’re providing them a good.