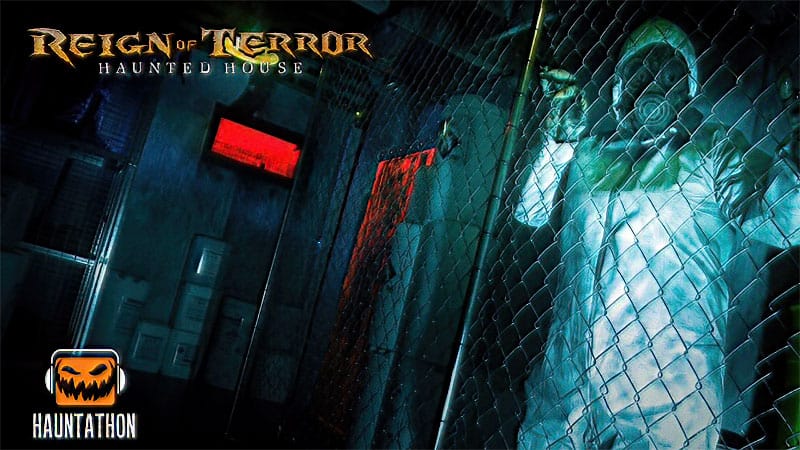 Reign of Terror Haunted House is open for 17 nights in the Fall of 2021 starting Friday Sept 24 through the Lights Out Special Event on Saturday Nov 6. Tickets can be purchased on their website in 30-minute blocks. The $30 ticket is General Admission, if you want to be admitted as the next available group in your 30-minute slot you can purchase the $55 Immediate Access Pass.

The New Location and Updated Layout

Bruce: So Reign of Terror this year is going to be very unique, because after the 2019 season we had to move locations. We had been in that spot for 10 years, so we were permanently set up. So, January of 2020 we started breaking down to move.

We are in the same facility we were, we’re just now downstairs, in a bigger space, more usable space, and we’ve had almost two years to perfect a better haunted house. So, the layout of the haunted house is completely changed. We’ve added a new section, we’ve added new rooms, we’ve changed many actor positions and actors’ scares. But we’ve really been able to fine-tune it because of the time that we got, unfortunately, because of not being able to run. So, if you’ve never been to the Reign of Terror Haunted House, or if you go every year, this is the year that you’re truly going to see something unique and different.

So, although we have some sections that are the same, the layout is exactly the same, a lot of the behind-the-scenes technology has gotten a lot better, which makes our audio, our camera systems, and our lighting so much more in tune. Instead of going to one system that fed everything, everything now individual systems.

Also, the way things kind of fell in place we have some voids, and the voids allowed us to create new rooms and new scenes. Then there were things that, in the old space, yeah they worked well, but they were just ready to be done, they were tired, they were kind of overdone, and those have all been changed. So again, that person that’s come for 10 years is going to have a new fun experience, and the person that’s never come is going to be overwhelmed with how much they’re going to see.

Bruce: So, first off for us, all of our staff, faculty, everyone affiliated with the Haunted House, is fully vaccinated; not one shot, but two shots, two weeks past so that we are fully covered. So, that’s what we have control over.

The Reign of Terror has always kind of had somewhat of a COVID protocol, because we put you in smaller groups. So, we’ve removed a lot of the touchpoints, some of them were claustrophobic in-your-face things have been taken away. Even though this year we thought we could still use them, we’ve elected not to bring them back. So, our pillow-wall that you were pushing into, we’ve removed that.

As of right now, that’s what we’ll be doing if things change, or the CDC recommends something different, we’ll do that. Our queue line inside is a little smaller, so most of the wait time will be outside in open space, so we think that’ll help with COVID and those protocols.

Bruce: We’ve added a lot more entertainment. Because we’re in a space that’s very controlled we have a big projector on the wall, we have animated creatures to look at, we have interactive, we have a photo opportunity that’s outside, so they’ll be more entertainment for people that are waiting outside.

We’ve also gone to timed ticketing, which dramatically helped our longer wait times, and we’re really, really getting away from a multi-tiered ticket where, if you bought a general admission pass and you didn’t have the money you were waiting for two hours, we’ve eliminated that. So, we do have a couple of different ticket options, but really these are streamlined to get people in. You come during your half hour time break. As long as people kind of follow those protocols, they’re going to be getting in the haunted house really quick.

Staffing at Reign of Terror

Bruce: We’ll have about 45 actors, which is pretty close to capacity, pretty close to what we normally would have run. We were very pleasantly surprised on all the new actors that we brought in how they were documented on their vaccinations. I don’t know if it was just luck of the draw, but the people that we have coming onto the crew have been vaccinated for months, which we were really surprised.

The key thing for us is safety, it has always been something high for us. It’s the strategy that makes the Reign of Terror work with small groups, so there’s not a whole lot of changes. Being a small group that you’re going into it’s going to be very intense, it’s going to be very scary, it’s going to build a lot of intimidation. The fact that we were off for a year and a half only works to the guest’s benefit, because we went into rooms and we figured out the smallest of little details and tweaks and changes that you may not know but is going to overall affect the positiveness of your experience coming through the haunted house.