In our day-to-day lives, there are moments we remember forever and others that slip away almost immediately. Not all moments are created equal. When designing haunted attractions, we must focus on creating exceptional moments. Many elements must come together to boost the sensory impact of haunts—scenic design, sound, lighting, etc.—but the connection with the character is what leaves the haunt lurking in our imagination well after we’ve left.

Your guests identify with the storyline of your haunt by identifying with the characters that live in it. Think about your favorite horror films. What do you remember most? Typically, it’s specific moments that involve the main villain—Freddy Krueger brandishing his glove, Jason Voorhees bursting out of Crystal Lake, Regan MacNeil’s head spinning completely around after being possessed by the devil. The character-centric moments live forever in the minds of those who’ve experienced them. By creating fully fleshed-out characters for your haunt, your guests will take home with them these same indelible impressions. Make Them Your Own

Many of the characters previously described have made appearances in some of the larger haunts around the country. While utilizing existing intellectual properties can make the haunter’s job easier—since the characters are already known to your audience—most haunts can’t afford the licensing fees. Be careful here because “borrowing” characters from films without securing the rights can expose you and your haunt to copyright infringement issues. But, not to worry! Creating unique characters to connect with your guests results in mind-boggling memorable moments; it’s something they’ve never experienced before! Original characters differentiate your attraction from others in your area and make a lasting impression on your guests.

What Makes Them Tick?

You must know your character as well as you know yourself. Only characters with depth enough to form connections with guests will live in nightmares. Developed characters represent your haunt in marketing as well as serving as the featured character in your haunted house. To flesh out a character, start by developing a profile to which you and your creative staff can refer. The character profile is also helpful to your actor(s) in their process of bringing the character to life. When developing your character’s profile, stay true to your haunt’s overall theme and consider these major elements:

By developing and writing a detailed origin story for your character, you give context to why your character does what they do and how they got to this place in time in which your guests are interacting with them. In the “Nightmare on Elm Street” film series, knowing Freddy’s past as a child molester and his connection to the school basement and furnace makes those moments more memorable by adding depth and texture to his character.

The look of your character is extremely important and should be strongly influenced by what you come up with in your character profile. In the case of Freddy Krueger, his horrifying appearance is a result of being burned alive by a mob of townsfolk. If you get the look right, your guests’ first glimpse of your character will create a moment that will stay with them long after they’ve left your haunt. A great example of this is the first (and only) time we see Jason in the original “Friday the Thirteenth” film. Even after 38 years, this is still one of the most memorable moments in the horror film genre. What does your character do in the haunt or in each scene that makes him/her unique? For Freddy Krueger, it’s his glove and quick wit. For Jason Voorhees, it’s his machete and the realization that he can’t be stopped. What unique traits, props, or character flaws can you give your character that will make him/her stand out and live in your guests’ memories?

Nowadays, every haunt has a website and social media presence. Leverage these tools to reveal backstory before guests arrive through photos or video character teasers! Exposure to your character ahead of time creates a richer experience for your guests and generates excitement before they arrive.

After all the work creating a memorable character moment, ensure guests have something to purchase; mementos add to the bottom line and serve to trigger memories. There are many customizable merchandise options on which you can print an image of your character and haunt logo. These include t-shirts, plastic cups, cell-phone cases, posters, etc. Another popular merchandising option used by many of the large haunted attractions is a photo op with your character. Here your guests will be able to have an up-close-and-personal interaction with your character and take home a personalized keepsake. While many factors contribute to memorable moments for your guests, their interaction with the living, breathing character you create has the potential to be your haunt’s highlight. Taking the time to develop engaging and iconic characters not only creates memorable moments but can serve as the basis for an ongoing storyline that makes your guests want to return year after year to participate in the latest chapter of your haunt’s story. Think of your favorite fictional character. List their physical and behavioral characteristics. If you met that character in person, what would the interaction be like?

List all the ways you were introduced to your favorite character from above. Can your attraction do some of these? Which ones?

What’s the main question you must address in developing a fictional character? [Hint: This is a great help to the actor playing the character.]

What are simple ways to enhance your guests’ interaction with the character and make the experience more memorable? 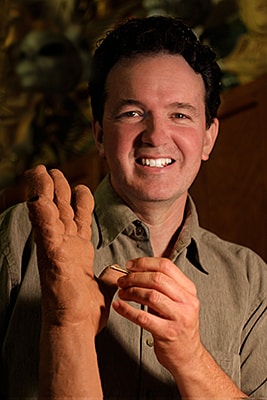 Two time Emmy nominated make-up artist Michael Burnett has been creating special makeup effects in the film, television, and the haunt industries for more than 30 years.  Michael has worked with academy award winning make-up artists Rick Baker, Greg Cannom and Michael Westmore.  Some of Michael’s film and television credits include, The Ben Stiller Show, Universal Soldier, The Forsaken, Star Trek Enterprise, Passions and Mad TV.   Between the years of 1997-2016 Michael designed and managed the makeup Deptment for Universal Studios Halloween Horror Nights 17 times, more than any other person.

Currently, Michael is the Director of design & development for FrightNight Studios, a Florida based company that creates makeup and effects for motion pictures, Television and Theme Parks including Bush Gardens, Universal Studios and Disney.  You can find Michael at www.michaelburnett.com