An Interview with Rick Jones of Horrify Me

Mikey discovers how a horror photographer extraordinaire created Horrify Me, and Hannah discovers her inner vampire.

Hello. It’s Mikey here, along with my faithful sidekick, Hannah. This blog is based on Episode 140 of our Scaretrack podcast, which is all about our experiences at Horrify Me, located all the way out in Dover, and our interview with Rick Jones, the owner and photographer. In case you haven’t seen it all over social media, Horrify Me is probably some of the best horror photography in the whole world. It’s absolutely phenomenal, and anyone can book a photo shoot with Rick.

How Horrify Me Came into Being

I bought Hannah a photo session with Rick as a Christmas present, and you’ll hear about that in a little bit. But first, I want to share with you my conversation with Rick about how Horrify Me came into being as a business. We wanted to know how he got the idea and how he got started.

“It started by accident when I was doing book cover designs as part of my day job,” he explained. “There was an author called Lisa Richardson who had a zombie novel, and it wasn’t selling terribly well. She was convinced that the original cover wasn’t right for the book and asked me to take a look at it. I agreed the book didn’t have the right cover, so we made a new cover for her, and the book is now selling really well. Out of that, Horrify Me was born.” 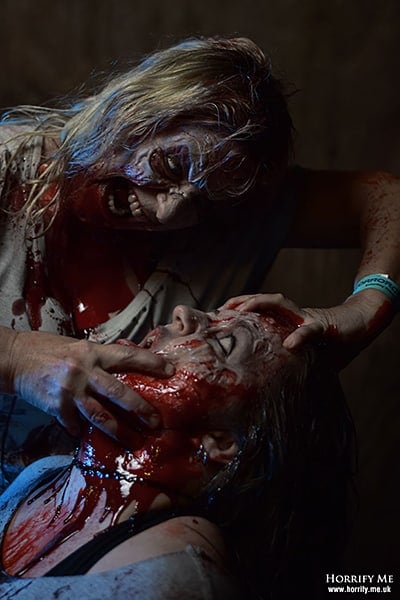 That’s a cool origin story if I’ve ever I’d heard one. I asked Rick about his “normal” job.

“In my normal job, I work in graphic design and manufacture graphics products,” he said.

Since Rick is a photographer, I asked him why he didn’t opt for the standard route of taking photos of someone’s wedding or models walking down a catwalk. Why horror?

“I’ve always loved horror, ever since I was a little kid. I was always drawing monsters and, by the time I was five years old, I was drawing big fanged creatures with blood dripping off the fangs. I’m trained in Fine Art, and I studied life drawing and painting, but I was never that good at it. I found the camera, which lets me create the same kind of art but with different tools.” 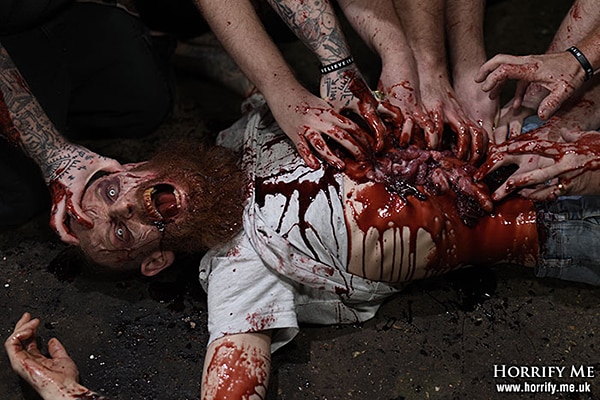 What Horrify Me Offers to Customers

For anyone not familiar with Horrify Me, I asked Rick to describe it and provide some examples of the kinds of photoshoots customers can expect.

“At its core, it’s basically portrait photography—except you’re made to look horrific,” he replied. “We can do zombie, vampire, Freddy Krueger—anything you want, really. There’s a menu on the website of shoots we offer, but we’re always happy to talk about original ideas. Quite often, people come in with their own ideas, and we just bring that to life. That’s always good fun, and challenging.”

For her shoot, Hannah wanted something that was a little bit sexy, but she also liked the idea of scary and horror. Rick does special effects and prosthetic designs as well. The photos on his Horrify Me website almost look like stills from a movie. I asked Rick if he had training in makeup before he started Horrify Me, or if he learned it as he went along.

“I’ve been doing makeup all along,” he said. “Even as a kid, I used to nick my mom’s lipstick to draw red lines down from my mouth to look like blood. That progressed onto buying little horror makeup kits for kids. The classic one was the Decker Horror Makeup Box, which a lot of people my age will remember. So, yeah, it’s just been a lifelong thing, and I brought all those skills into Horrify Me.”

Rick knows how to do cosmetics and special effects, he knows how to take photos, he’s arty, and he loves horror. You mix that into a cocktail, and Horrify Me is the result. By the way, Horrify Me has won awards, so you can’t argue with that.

If you want to book a shoot with Rick, the best way to contact him is on his website, which is www.horrify.me.uk. This is also where you can see video and stills of shoots and find all the information about booking a shoot and what to expect. You can find him on social media as well—Instagram, Twitter, and all the other usual ones. “You may not be able to find us on Facebook, because we’re always getting bloody banned,” he noted. 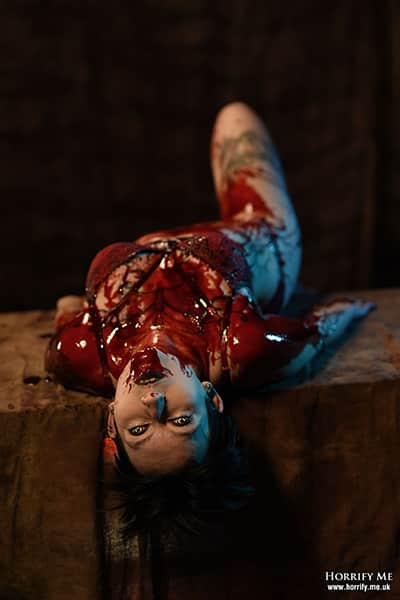 So, as I mentioned, in addition to talking with Rick, our visit to Horrify Me was my Christmas present to Hannah. I asked her what she thought about it and if she liked it.

“First of all, I was blown away by all the blood,” she replied. “I liked it more than I thought I would, and that’s not me saying anything negative. I went in quite nervous and apprehensive, because I ain’t no model, so it wasn’t my forte. However, as soon as we got there, I was made to feel at ease. I was offered tea or coffee, and they made me feel dead comfortable. It was totally professional with the whole getting-into-the-costume thing. It didn’t feel awkward.”

The set-up of the studio is really awesome, with all these lights and the backdrop.

“Rick just put me so much at ease,” said Hannah.” As I mentioned, I’ve not modeled a lot previously and, when I have, it’s been, ‘Give us a nice pose, kiss your fiancé,’ and those sorts of photoshoots. Going suddenly into a vampire mode, I was expecting straight away to be fully bloodied up and snarling, but Rick took us through a process, explaining the backstory of the vampires and what kind of story we were trying to tell through the photos. He was letting me know what positioning worked best, but he wasn’t telling me, ‘Put your hand there,’ or do this or that. It was more like, ‘It looks really good if you contort your body so it doesn’t feel natural. Like, have your shoulders more forward.’ And it did look good, even though it’s not what you’d have thought would look good.” 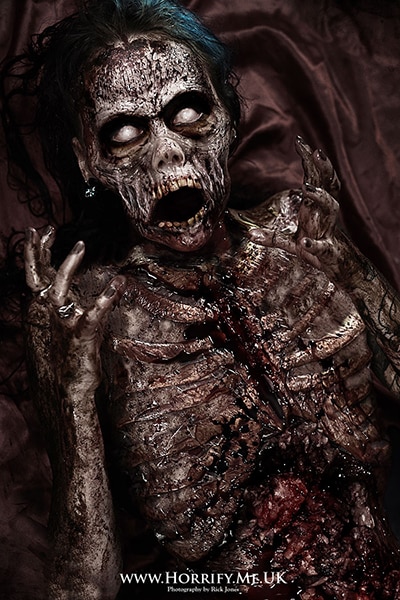 If you want to see bits and bobs from our day, head over to our YouTube channel, Youtube.com/Scaretrack, where you’ll be able to see the Scarecam of the day. I watched the shoot and could see that when Rick made a suggestion on what someone should do, I was like, wow, those tiny little movements make all the difference. And Rick said Hannah was a natural.

“He made me feel like a real model. At the end, he even asked if there was a particular shot I wanted to get,” said Hannah. “I told him I wanted to lick your neck.”

That’s right. She wanted to lick my neck. And there’s a picture of that as well.