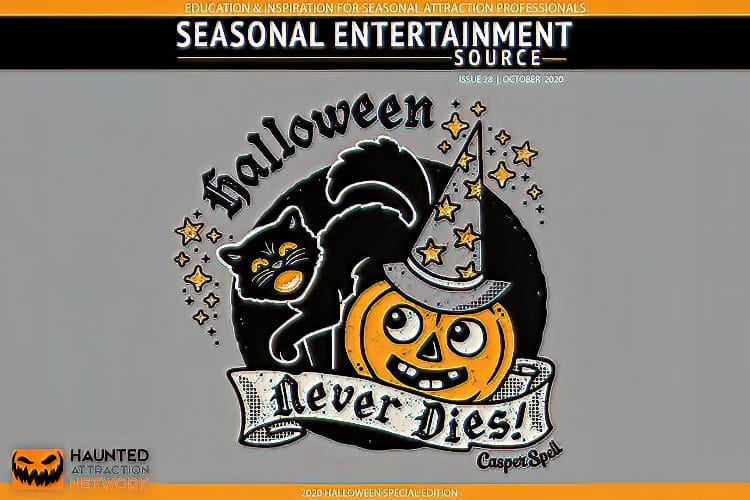 Today’s Halloween Special “Halloween Never Dies” is presented in two acts, with an intermission.
Act 1 is the audio version of Seasonal Entertainment Source Magazine’s Issue 28. Intermission includes music from Chris Thomas and Whispers of a Witch’s Halloween Special. Act 2 is a collection of short stories from haunters about why they love Halloween.

This episode was produced by Philip Hernandez and Sponsored by Gantom Lighting and Controls.

Halloween Past and Present

Take a trip with me through Halloween Past and Halloween Present. Today we’re going on location to haunted attractions all over the US, including: Kinetic Theory in Los Angeles, The Queen Mary in Long Beach, Forbidden Acres in El Paso, The Maize in Buffalo, Howl o Scream in Tampa, Halloween Horror Nights in Orlando, Creatures of the Night at ZooTampa, The Dark Seance and The Tunnel of the Damned, and Sir Henry’s Haunted Trail in Orlando.
Listen online, on our website, or via Soundcloud, Google, Spotify, Breaker, Spreaker, Overcast, Castbox, iTunes, iHeartRadio, Stitcher, or RSS.

Awake in the Dark

While sitting at home is driving some of us crazy, it’s giving others the chance to create. In this year when so many haunts have gone dark, home haunts are seriously stepping up. On today’s special, join me on a road trip to 4 different home haunts. We’ll hear all about the obsession, the learning, and the passion behind these projects. Coming up, we’re stopping at Hull House in Buena Park, 1870 Haunt Manor in Anaheim, The Grey Phantom is Norwalk, and the Real Ghostbusters Display in Austin Texas. Buckle up and let’s hit the road!
Listen online, on our website, or via Soundcloud, Google, Spotify, Breaker, Spreaker, Overcast, Castbox, iTunes, iHeartRadio, Stitcher, or RSS.

Ernie in Buena Park created a tribute to The Grey Phantom (AKA The Queen Mary) in his front yard.

Jon is a first-year home haunter in Austin Texas, and he setup a wicked tribute to Ghostbusters

Growing up in the shadow of Knott’s, Michael was too young to scare act.. So he made his own experience!

Themed after Night of the Demons, this home haunt in Buena Park delights all ages.

A short video montage of our visit.

An Update from the Ohio Haunter’s Association.