In This Experience, She Learns That Fear Can Be Funny.

This blog is based on our ScareTrack podcast episode 137, when I attended opening day at Alton Towers for the 2019 season and checked out the Alton Towers Dungeon. The Dungeon isn’t in the Towers but is located near Cloud Cuckoo Land, which is just at the back of the park in the old Charlie and the Chocolate Factory Ride. I was dead excited about this, because it meant there was going to be a bit of a boat scene like in the London Dungeons. Actually, it was the boat scene that was utilized for Charlie and the Chocolate Factory, not the boat ride that was in Toyland. Anyway, I went with my friend Kim, who’d never been to Alton Towers Dungeon but had been to White Dungeons. She said she wasn’t the biggest fan of that, so she was absolutely petrified to be going into the Alton Towers Dungeon.

When we arrived at the Dungeon, the facade wasn’t as grand as I thought it would be, but as I got closer, I realized it was a family-friendly attraction in a family-friendly theme park, so that’s why it doesn’t look scary. Since it’s next to Cloud Cuckoo Land, that makes sense, as it would entice more children to go in. If there was a demonic looking facade, I suppose the families wouldn’t go in, and it wouldn’t make as much money. There were some skeletons in cages, some scary-looking statues, and live fire, which was exciting, and there was a nice selfie area where you could go up onto a podium and have a photo underneath the Alton Tower’s Dungeon sign. 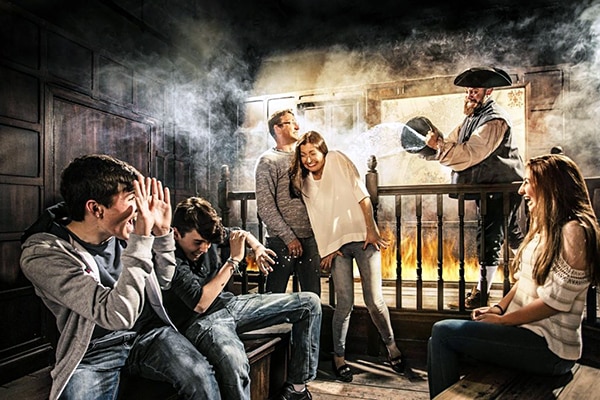 My first reaction was it looked good—not scary, but interesting. Once I went through, I was pleasantly surprised. I went in expecting your typical Dungeons, expecting to know the scripts we all know—the Court script, the Plague script—but they really shook it up. Apart from San Francisco and Glasgow, I’ve been through every single Dungeons, and this was by far the funniest Dungeon. I was laughing from start to finish. They say fear is a funny thing. It definitely was at Alton Towers Dungeon.

Once we went in, there was the usual photo point, and, after that, we went straight into the Court scene. This was the first time at the Dungeons that I’ve seen a Court scene done first, and I liked that. The first scene always sets the tone in Dungeons. Most of the Dungeons have quite a stiff scene where you stand round watching someone talk at you for a bit, or sometimes it’s an animatronic head that’s talking at you, setting the scene for what year you’re in: “The year of our Lord is 1616” or something like that. This started with the Court scene, in which our various crimes were rattled off, and it was absolutely hilarious from start to finish. Also, is made sense to me to start in the Court and then go into the Dungeons. We were all guilty, and we’d been condemned to life in the Dungeons. 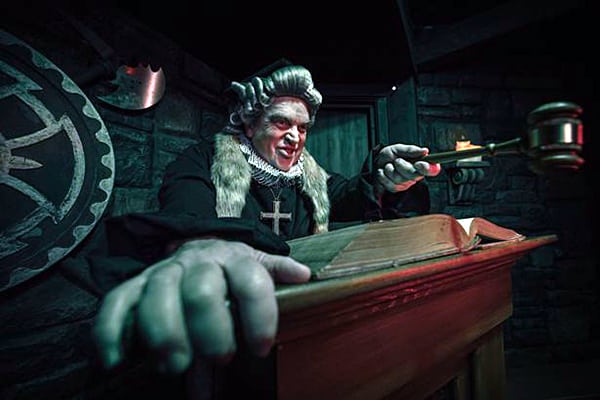 After that, we went straight into the boat scene. The boat scene is exactly the same as it was in Charlie and the Chocolate Factory—only painted a bit more gory. We were greeted by a host for the boat, who was absolutely hilarious, who told us the rules for the boat and how to get into the boat. All the actors were completely on point. If you stepped out of line or did anything that was general human stupidity, they’d pull you up on it. I got pulled up on the boat scene, because I can’t take directions. The boat takes the same route as in Charlie and the Chocolate Factory, so there are similarities in the theming and the route. For me, this boat ride was better than the London boat ride. It was funny, it was scary, you got a little bit wet, and there were some jump scares, which were great. Kim was jumping and screaming the whole way through.

The boat brings you to the City Gates area. Again, the actors were on point and hilarious. The way they managed new groups from different boats coming into our group was great. After that was the Torturer scene, which was exactly the same as other Torturer scenes we’ve seen before. They use the same utensils and have the same sort of spiel.

After that was the Plague. I think. Or may it was Turpin, which is like a scene from Sweeny Todd. You go into a bar, you sit in a seat, Dick Turpin comes in, and some special effects happen in your chair. The Plague scene is exactly the same as all other Plague scenes with the same sort of script and dialogue. The actor in that was also on point, and it was the first time I’ve seen an actor in the Plague scene sort of play it cute—not scary, not gory, just cute. I really liked this Plague scene, considering it’s a scene I’ve seen in all Dungeons. 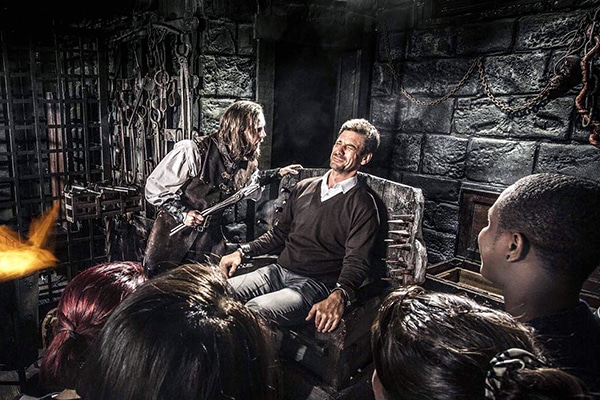 We finished up with the Witch scene. This was quite similar to Witches of Warrick over at Warrick Castle Dungeons. It was quite a similar setup: Everyone sits around a room, and it’s all dark and mysterious. When the actor in this scene first started talking, I thought to myself, “Oh, he’s quite subdued compared to the other actors. He doesn’t seem like he’s up for a laugh. Maybe he’s a bit nervous.” The fact that he was so subdued and so quiet was such a contrast to what we’d heard from all the previous actors, and it really set the scene. He had us on edge. There were people in that room who go through scare attractions all the time, go through Dungeons all the time, and they were absolutely screaming in that scene. I thought it was brilliant.

So, I really liked my visit to the Alton Towers Dungeon. It was opening day, so the park was close to capacity with visitors. I asked Kim for her reaction.

“For my first proper experience, it really had me on edge, but it was funny as well. It had a bit of everything there for me. I really enjoyed it, and I’d probably come back again,” she said.

I wouldn’t say it’s my favorite Dungeons, overall, because that’s still Amsterdam, but Alton Towers is a strong contender for UK Dungeons.