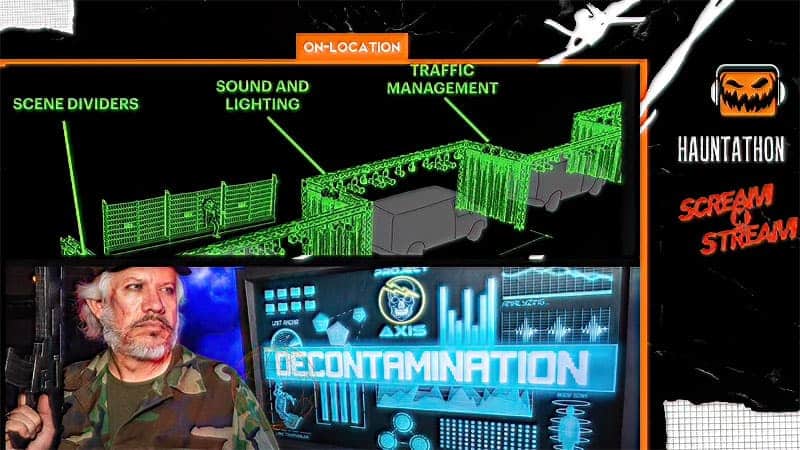 This is day 19 of our 61 day Hauntathon. Today we’re going on location with Scream and Stream in Oviedo Florida to talk to with the Creative Director, Patrick Braillard.

Patrick Explains How He Became Involved With Scream and Stream

Patrick: So, Scream and Stream, originally for the version one that happened last year in the throes of the pandemic, came about at the end of June for the team, and they had a very successful fall; 4,200 cars went through, they donated almost $5,000 to Second Harvest, and they employed 75 people in the middle of a pandemic, which is fantastic as a group.

Then, they approached me in December and asked whether or not I would want to come on and help with the creative. They said, “we’d love you to be the lead creative writer. We want to see what’s inside your brain. You’re freelancing right now. Let’s see what happens.” So, I said, “yeah, do you have any ideas about what you want to do for the event?” And the three beautiful words, “clowns versus zombies,” fell out of their mouth and I went, “okay. Yeah, we’re good.”

Then it became a collaborative conversation over the course of the spring of how we wanted to deal with it. I popped off a treatment. Fairly quickly in January, February, and then throughout the entire summer, we shaped the treatment going back and forth and adding and taking away things that we knew were going to be impactful to the guests.

Patrick: One of the things that we wanted to make sure of is that we held onto the essence of what Scream and Stream actually was, a drive-thru horror adventure.

In version one, it was more about protecting the guests from the horror, and they could still have a voyeuristic kind of feel for it, but in version two, they are very much a part of the action. They get laser guns, they have a tech package they’ve got to get from the beginning to the end, and they’ve also got enhanced sound effects, special effects, lighting and audio are completely new and remastered this year and in different positions, and as well as scenic blind so that you don’t see directly into the placement of performers, which also adds to the, the suspense and the overall enjoyment of the event.

So basically, the team decided to lean into the car aspect as a differentiator. And this year, because they could leave the windows open, they added more interaction to give the passengers something to actively do in the experience.

Why Was the Oviedo Mall Picked as the Location?

Patrick: I think one of the reasons that we settled on this particular parking lot was because of the other things that are available for people to do while waiting to go to Scream and Stream and enjoy their entire weekend. The experience itself 22 to 27 minutes long, but you are also in a virtual queue. So, you have the opportunity to go do other things while you’re waiting for your time. You’re not just going to be sitting in a car line waiting hours on end while the kids are screaming at you, “are we there yet?”

The choice to come to Oviedo is a no-brainer in my mind, because you’ve got the Oviedo Mall, you got District Eat and Play, which is an arcade family entertainment center with bowling and things to keep yourself occupied while waiting for your time, but you also have the Oviedo Brewing Company. So, if you have a group of friends and you want to get together and have a few drinks and go shoot zombies, this is the place to be.

You have a logical jump from, what was last year, a long drive out for a short experience, now it’s a shorter drive to come out for a longer experience, and now you’ve got the entire evening planned. I think that having it be a one-stop shop is absolutely wonderful.

Patrick Explains More Reasons Behind Having A Car Based Event

Patrick: We’re looking to hit a lot of different age groups and a lot of different personalities. It’s not just for the horror-centric crowd, this is one for the family. People who are 5 to grandma’s age, 95, can all jump in the car and come and experience this.

Also, one of the things that became evident very quickly when Scream and Stream version one was up, and we’ve now since taken that under advisement looking forward too, is the amount of people that might have mobility issues and not be able to go to a traditional haunt or might not be able to go stand in long lines for hours on end. So, they’re able to also experience things, and they’re able to have just as much of a good time about this.

It’s something that is an important facet to the entertainment aspect of our event we wanted to make sure that we clued into, the accessibility of people being able to come and enjoy the event for a lower ticket price per capita.

We were fond of saying, and I know that it is online, all over social media, that we are a per car event, we are not a per person event. So, if you have a car that can fit five or six people, it is an extremely affordable evening for a lot of entertainment.