The Newly Refurbished and Immersive Horror Crypt in Blackpool

This blog is based on Episode 133 of the ScareTrack podcast, in which Hannah and I did an on-location interview with Kurt Walsh, the owner of Horror Crypt in Blackpool. Kurt and his wife bought Horror Crypt in 2017 when it was in dire need of some TLC. Many of the exhibits were broken, it was dingy, and it wasn’t looking good at all. Since then, Kurt and his wife have turned the business around, and now it’s an absolutely fantastic immersive horror walkthrough. Hannah and I have gone through it plenty of times over the last couple of years, and it’s such a fun sort of scare and horror-film experience. It’s only three pounds to go in, and it’s something you just can’t miss if you’re a horror or movie fan and are visiting Blackpool. 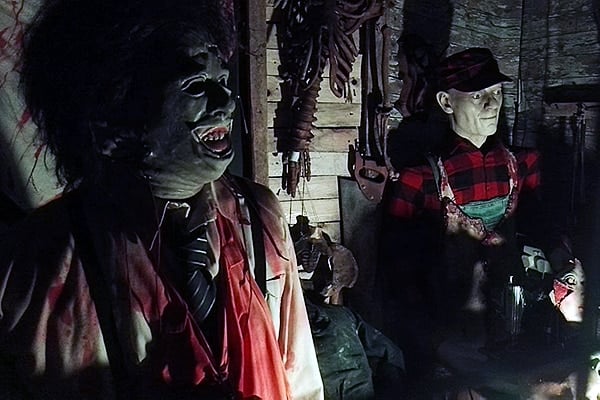 A Must-Visit for Horror Film Buffs

Hannah and I chatter with Kurt during the opening weekend of the 2019 season of Horror Crypt, on a not-so-sunny day in Blackpool. Horror Crypt is on the promenade, and it’s basically an homage to horror films with a little bit of scare added. In addition to actual props from horror films, there are manikins of characters from those and other films.

So, Hannah and I went in with our camera, because you can film inside Horror Crypt, and we wanted to video some snippets inside the attraction for out little side project, ScareCam. To see these, go to our YouTube channel.

Horror Crypt has all the ingredients of a scare attraction—animatronics and such—but it’s missing the scares. However, it doesn’t need those, because people are coming to see the horror movie bits. It’s just a little bonus that you get a mini-scare attraction in there. “Once you go down the stairs, it’s not really a scare attraction as such, but there are narrow walls, slanty floors, and air cannons,” Hannah pointed out.

If you’re a horror-film buff, you absolutely must visit, but, even if you just want something else to do in Blackpool, the admission costs less than a coffee or a pint. It only takes about five to ten minutes to go through unless you want read all the individual posts about where each prop is from, what film it was used in, what year it was made, and that sort of thing. So, there’s lots to learn if you want to. 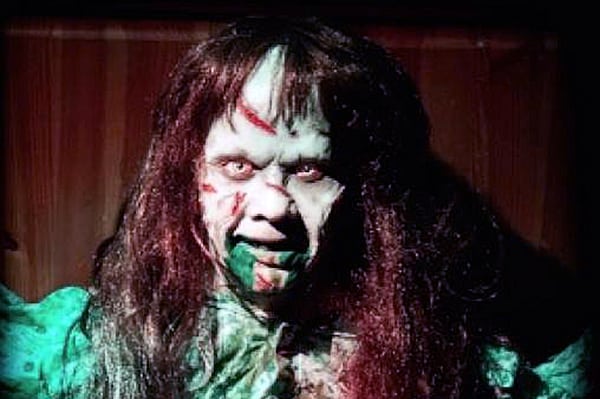 An Attraction in Two Halves

Don’t go in there expecting mega-intense scares or anything like that. It’s sort of an attraction in two halves. Upstairs are the authentic props and scenes from horror movies, which any horror movie fan would love. Downstairs is more theatrical, more immersive, more of a mini-scare attraction/walkthrough kind of thing. Kurt and his team have put a lot of blood, sweat, and tears into this attraction to make it as good as it can be. It’s a stand-alone family-business, and we want to support these smaller attractions, because they need our support more than anyone.

After our tour, we talked with Kurt. We asked him to give us some history on Horror Crypt and how he and his wife came to be the owners of it. Horror Crypt has been here for years. It’s a staple of Blackpool, and it’s been in movies and videos.

“Horror Crypt was in a video for The Killers. One of the guys comes out the door there,” said Kurt. “As far as how we came to own it, I was working at Passage del Terror at the time as a scare actor. I was very happy in that job. One day, I happened to come down to Blackpool, and that’s when I realized Horror Crypt was still open. That surprised me. I used to come here all the time as a kid and was a big fan of the place as a child. I walked through and, while I was glad it existed, it was very much in need of an update and repair, because certain things weren’t working. My head started filling up with ideas. On my lunch breaks, I’d come down, walk around, and think, ‘What would I do differently?’ I put some ideas across to Ripley’s, who runs the place, but they said they didn’t have the time to make the changes. That’s when I proposed doing the place up for them. Then my wife kind put a word in my ear: ‘Why don’t we run it as our own business?’ My response was, ‘We can’t afford this,’ but then she said, ‘There’s money I’ve not told you about.’ These were soundtrack royalties and stuff like that were hidden away that I’ve not touched. So, we bought it two years ago. This is our third season and our second year of running everything.”

I asked Kurt to talk about challenges he anticipated when he and his wife bought the place. 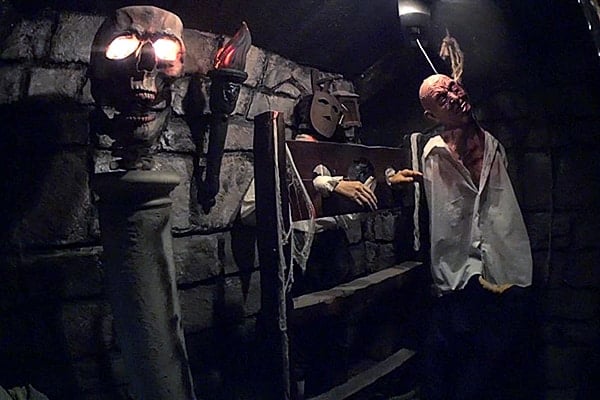 A Dream—and a Nightmare—Come True

“It’s been a dream come true, but also a nightmare come true, too. The closest thing I can compare it to is when we had children. It’s this giant thing, but there are so many nightmares and anxieties you don’t even think of that present themselves. It’s constant maintenance, too. There’s always something that needs fixing, something that needs replacing. My main worst enemy has been my own restlessness. I opened the place in a certain way, but I wasn’t happy, even though I knew it was an improvement on what used to be there. I always have new ideas about how to do this, how I’d do that. If I was a smart businessman, which I’m not, I would have done the place up, made the renovations, not touched it for about three years, let it accumulate money, and not spend any money. That’s business 101. But, I’m an idiot. A horror fan idiot. I’d rather see it looking the way I want it to look than make a bit of extra money. It’s a constant case of seeing what works and what doesn’t work, what people take a shine to and what they don’t—much like a scare attraction.” 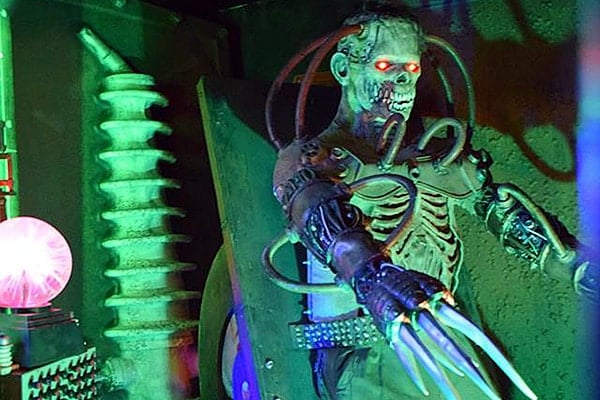 Always Something New Being Added

I mentioned to Kurt that we’d seen on social media that some great last scenes had been added with some really big animatronics, and it was looking really good. In fact, every time we visit, we see something new. Many people come to Blackpool for their family holiday once a year and, if there weren’t any changes, they might not visit Horror Crypt the next year, I noted.

“When I came in that first time on my dinner break from Passage, it looked exactly the same as when I was seven—except a few things had stopped working,” said Kurt. “I value return customers. People who come back and constantly support your business year after year deserve to have something new to look at. But, that aside, I have this OCD in which I get bored with things and want to change them all the time anyway. This is quite liberating for someone who’s worked in other attractions and thought, ‘I would be cool if we could change this or we could change that.’ On the one hand, it’s liberating being able to make all these changes, but, like I said, it’s also a curse, because you try to convince yourself to leave everything as it is for a while, sit back, and make some money. But I’m always building a new Frankenstein’s laboratory or something like that,” he said.

I pointed out that his OCD was only making the attraction even better. 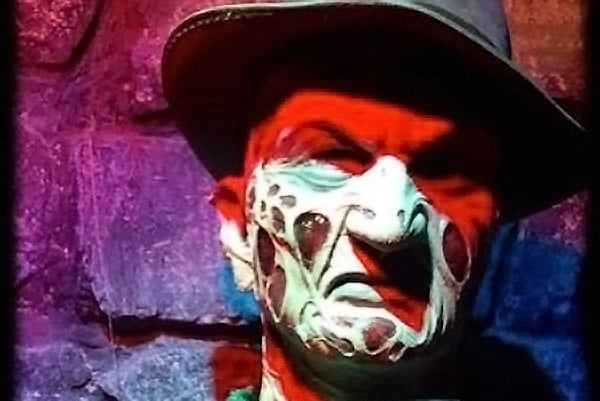 We asked Kurt how visitors to Blackpool can find Horror Crypt.

“We’re a little bit off the beaten track, which kind of helps with hiding the bodies and stuff,” said Kurt. “If you’re feeling brave and up for a bit of adventure, go to Ripley’s, walk straight down, and, it’s just on the corner to the underpass where you go to the Pleasure Beach Arena. There’s a big old gargoyle at the front entrance.”

Yes, it’s got that foreboding facade, which is awesome, so it’s hard to miss Horror Crypt. There are snippets of the exterior facade on our ScareCam YouTube channel as well as video from the inside.

We asked Kurt how people can get in contact with him or check out the Horror Crypt on social media.

“The best place is probably our Facebook page, because it’s updated daily. If anyone has any questions or qualms, just get in touch.”

So, in the spirit of supporting your local horror attraction—and to see some really great props and classic horror movie memorabilia—check out Horror Crypt.