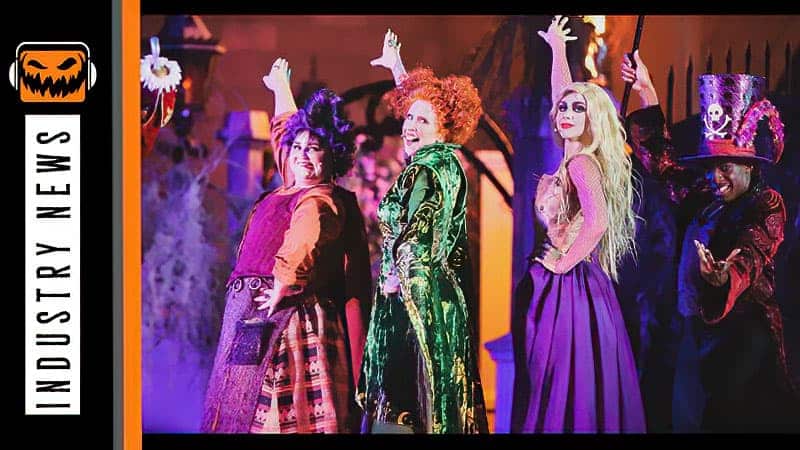 Here is the Haunted Attraction Industry News for May, 2nd.
If you would like to receive this in your inbox, CLICK HERE

Happy Halfway to Halloween! May 2nd is the official halfway point to the big day. Haunts around the country are celebrating by opening their doors for special events and celebrations. You can view upcoming events here.

Disney celebrated Halfway to Halloween with many announcements regarding the company’s Halloween plans:

Mickey’s Not-So-Scary Halloween Party will return to the Magic Kingdom in Walt Disney World for 37 select nights from August 12th – October 31st, 2022. The party will feature Trick-Or-Treating at locations throughout the park as well as the “Mickey’s Boo-To-You Halloween Parade”, the Sanderson Sisters in the iconic “Hocus Pocus Villains Spelltacular” stage show, 50th anniversary exclusive photo ops, and event-exclusive entertainment (including the Haunted Mansion Graveyard Gravediggers). Attendees will also receive a resusable trick-or-treat bag featuring a keepsake 50th Anniversary pin. Tickets will be available starting May 12th with prices ranging from $109 – $199.

The Disney Cruise Line will offer all-new Halloween experiences with Halloween on the High Seas. This September and October, guests will run amuck (amuck! amuck!) on Halloween-themed cruises with special entertainment and activities, including trick-or-treating, spooky parties, elaborate décor, and limited-time food and beverage items. The event will also feature an all-new character meet and greet with Minnie Mouse, Daisy Duck, and Clarabelle Cow dressing up as the iconic Sanderson Sisters from Hocus Pocus. Other festivities include Mickey’s Mouse-querade Party (a fun-filled costume party for families), villainous takeovers in the adult-exclusive areas, Halloween-themed movies, and ghostly takes on ship announcements.

Two weeks after being killed by the Elgin City Council, the zombie-fest Nightmare on Chicago Street (Elgin, Illinois) is back from the dead for 2022. After public outcry from mid-April’s decision to cancel this year’s Nightmare on Chicago Street event, the council revisited the issue and held a second vote. This time, the council approved the event 6-2. Despite the council’s concerns over the shortened timeline, uncertainty regarding the pandemic, a shortage of volunteers, and increased cost, the council decided that the committee members responsible for the event are up to the challenge. Local businesses rejoiced with the new decision, “The economic impact for that day is phenomenal, but it’s not only that day,” said Greg Shannon of the local business, Elgin Public House, “It’s that week, that month, it’s the people you meet downstate who say ‘Oh Elgin, that’s the place that does that Halloween thing…That’s the kind of impact that we need for this city.”

Netflix and the experience discovery platform Fever have teamed up to produce a new immersive Stranger Things experience at The Duggal Greenhouse in Brooklyn, New York. The experience will take fans inside some of the series’ most iconic settings on an intimate guided new adventure alongside the characters. Guests will also be able to enjoy “The Mix Tape Area” – a space filled with photo ops, engaging interactivity, delicious food and drink themed from the show, and a one-of-a-kind Stranger Things Bar. The brand new Stranger Things: The Experience opens in San Francisco and other cities around the world later this year.

SugarMynt Gallery‘s newest exhibition, Spooky Kids Club, will be opening on May 7th and run through June 19th, 2022. The main gallery will feature original artwork for sale by local California artists, as well as artists from around the United States. The paintings and displays will be inspired by content including It’s the Great Pumpkin, Charlie Brown, Scooby-Doo, Are You Afraid of the Dark?, Coraline, Goosebumps, Disney’s Haunted Mansion, McDonald’s Halloween Happy Meals, and many other pop culture staples that first sent chills up our spines. Displayed among the artwork you’ll find actual pieces of entertainment history including props from the Disney Halloween classic Hocus Pocus and Nickelodeon’s Are You Afraid of the Dark?, along with Ben Cooper Halloween masks. There will also be original photo opportunities inspired by some of your favorite titles. The Haunted Attraction Network will be at the opening event this weekend. We hope to see you there!

The Spooky Swap Meet returned to the Heritage Square Museum in Los Angeles this past weekend for a successful 2nd year.

Knott’s Scary Farm (Buena Park, California) is hiring a Venue Supervisor. The Venue Supervisor’s responsibilities include maintaining the quality of the show from opening to closing; ensuring that each performance is consistent and follows the set guidelines; tracking all scheduling adjustments; and handling issues, employee concerns, guest complains, special requests, and any other unusual occurrences or situations. The ideal candidate will have 2-5 years of leadership experience in an entertainment-driven field, demonstrated skills in effective budget and scheduling management, and ability to work nights, weekends, and holiday periods to meet business needs.

Tickets for the Texas Haunters Convention Haunt Tour are now on sale. Hop onboard a charter bus Friday evening to get an exclusive lights-on guided tour of both Dark Hour Haunted House and Hatch & Kraven’s Slaughterhouse hosted by some of the key designers. Guests will be able to walk through the haunt and backstage areas, while asking questions and learning from the pros. More information and a detailed itinerary can be found at the event’s official website.

In the most recent episode of A Scott in the Dark, Scott Swenson shared tips regarding quotes and contracts for goods and services. While it is important to note Scott is not a lawyer nor is he an expert in contract law (always consult your lawyer for legal matters), Scott does regularly navigate quotes and contracts in his creative consultant work. Scott’s process often starts with a Non-Disclosure Agreement (NDA), which states that the information relayed to one or both parties will remain confidential. This can facilitate communication by enabling clients to feel more comfortable sharing proprietary information. Next, a quote for services is prepared. The quote will include company information, detailed scope of work, compensation, timelines, and ownership of work. Often, the quote is utilized to prepare aspects of the contract. Contracts are important and beneficial to all parties because they detail the specifics of the business agreement and set clearly defined expectations. Be sure to thoroughly read all contracts – and contact a lawyer for any questions or concerns.

Don’t let DMX intimidate you. DMX is a protocol used to control lights, fog machines, and triggers in your haunt – a fixture generates a signal and then that signal travels to the light/fog machine/trigger to tell it what to do. The signal can be pre-programed or controlled live – scaling from controlling 1-2 lights all the way to a complicated large show. In a recent Haunted Attraction Network podcast episode, Julia from Gantom Lighting & Controls shared some suggestions on simple uses for DMX and DMX alternatives.

Fright Night Studios founder Michael Burnett started his career with movies (including the horror classic Evil Dead II) and now he creates movie-quality props for the haunt industry. Their most popular props from this year’s TransWorld Halloween & Attractions Show were their animals – including their Dead Baby Pigs, Severed Cow Head, and Dead Oppossum. Their animals come in various states of decay – and some can be made with “breathing” mechanisms to make them appear to be alive. Another popular line is their pumpkins – many of which are molded off real pumpkins Burnett saved from previous Halloweens. Since Fright Night Studios props are handmade, they can also customize their props to fit an individual haunt’s needs. View Fright Night Studio’s full catalog on their official website.

Do you have your haunt insurance for this season? From property & liability insurance to umbrella policies and workers comp, insurance companies can help you navigate your options and get you the coverage you need. At this year’s TransWorld’s Halloween & Attractions Show, our Haunted Attraction Network reporters interviewed representatives from Leavitt Insurance and Donat Insurance about their offerings. One tip they shared was to consider “Inland Marine” coverage. While this insurance’s name comes from its historic development as an outgrowth of ocean marine insurance, its purpose is to indemnify loss to movable or specialized types of property – like haunt props. For more insurance information and tips, also listen to our February 19th interview with another HAA vendor, Granite Insurance.

Disney has released new details and the official logo for the upcoming new “Haunted Mansion” film. Directed by Justin Simien (“Bad Hair”), Haunted Mansion stars Rosario Dawson (“Zombieland: Double Tap”) as a doctor who, along with her 9-year-old son (Chase Dillon, “The Underground Railroad”), looks to start a new life by moving into a strangely affordable new mansion in New Orleans, only to discover that the place is much more than they bargained for. Desperate for help, they contact a priest (Owen Wilson, “Loki”), who, in turn, enlists the aid of a widowed scientist-turned failed-paranormal expert (LaKeith Stanfield, “Knives Out”), a French Quarter psychic (Tiffany Haddish, “Bad Trip”), and a crotchety historian (Danny DeVito, “Jumanji: The Next Level”). Haunted Mansion is currently slated for a March 10th, 2023 release.
Under Wraps 2 is coming to The Disney Channel this Fall. As part of their Halfway to Halloween Celebration, The Disney Channel posted a compilation of interviews and fun facts featuring the cast of the upcoming sequel to 1997’s Under Wraps.

Halfway to Halloween / Friday the 13th

Vortex Tunnels and You
We’ve all seen them, and maybe you’re thinking of adding one to your haunt. Today we’ll learn all about them from GEP Productions (including pricing), so you can decide if it works for you.

Faux Finishes for Your Haunt
Rust, mold, slag, water damage, ooze – Brutal Rust provides faux finishes for your haunt. Established by haunters in 2011, Brutal Rust has grown its customer base and catalog tremendously over the years.

Insurance Options for Your Haunt
Do you have your haunt insurance for this season? Today, we’ll hear from some vendors offering coverage for your haunt. if you have specific questions about haunt insurance – let me know ([email protected])! Featured in this episode is Leavitt Insurance and Donat Insurance. A third option is Granite Insurance, and we interviewed them back on our Feb 19th show.

2022 Products from Fright Night Studios
Founder of Fright Night Studios, Michael Burnett, got his start in movies. And his angle is bringing movie-quality pieces to your haunt. Today, we’ll learn about his studio and their ability to customize props.

A Scott in the Dark: Episode 66 – Quotes and Contracts
Scott discusses how he has handled quotes and contracts for goods and services within the Haunt industry. NOTE: Scott is not a lawyer nor is he an expert in contract law. This episode is designed to share thoughts on what can or should be in a quote or a contract.

Parks, Politics, and Purchases
We dive deep into Disney’s troubles in Florida, then hit takeaways from the dissolution of CNN+ and the latest RWS acquisition.

This Episode is Sponsored by: