Haunted Attraction Easter Eggs, the How and Why 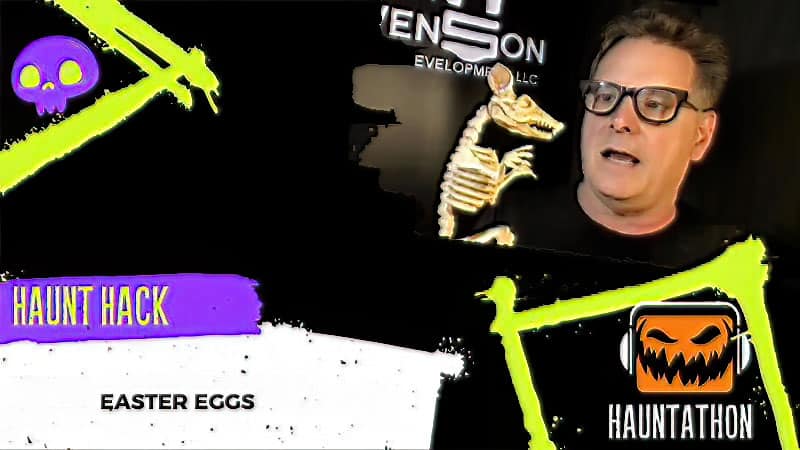 This is day 15 of our 61-day Hauntathon counting down to Halloween.

Here’s Scott Swenson with his haunt hack on leaving Easter Eggs in your design for those super fans.

Scott: Now, this particular Haunt Hack is a little weird; it doesn’t necessarily bolster your haunt, it doesn’t necessarily make your hunt any better, but it just might get people talking about your haunt. If you are a gamer, these things are usually called Easter Eggs. If you are a Disney freak, or a Disney fan, they’re usually called Hidden Mickeys. Basically, what they are, are small hidden treats that just automatically blend in with the scenic, but if you know what to look for you can actually sort of gamify, create another element, or another level to your haunt.

Scott: Let me give you a specific example, and I think that will help you understand them better. Several years ago I went to a dollar store and I found these really cheap plastic rat skeletons; and I guess apparently rats have bones in their ears based on this skeleton, which I never realized. But anyway, the idea is that these guys are not that bad to look at. You can go back and paint them a little more if you’d like, but if you’re putting them in the dark, you really don’t need to. They’re somewhat posable, they’re not as poseable as something that you might get at, say one of those Halloween prop stores, but they’re cheap, they’re a buck apiece. What I thought would be really fun with these is to take them and put them in different positions, maybe get 13 of them, because I like the number 13, and place them in hidden locations as part of the scenic around your haunt.

Don’t say anything about them when you first open, but in the middle of the run when you get to a point where you want just a little bit of extra attention or a little bit of extra media, maybe you go out and you say, “hey find the 13 hidden,” well, I guess they would be hidden Mickeys in this case,  “the hidden rat skeletons,” or whatever they are. You could use whatever is most appropriate for your storyline. “See if you can find all 13 of them and post where they are on our social media.” What it does is it gives you a huge boost of social media and it makes guests come back again to experience your haunt, because they may have noticed one or two the first time, but when they’re going back with a purpose it may actually generate a second visit.

Now you know, obviously, they don’t need to be rats, they can be whatever is going to work for your haunt. The other advantage, too, is when people come back looking for these, then they’ll be distracted, you know, it will give your performers an extra opportunity to come in and give them a great startle.

Scott: Another thing I like to hide in haunts is what I call my signature. Now, I don’t know whether everybody knows this or not, but whenever I write or design a haunt, I do my darndest to try to find a way to incorporate a rabbit. Sometimes that is something as simple as a small rabbit figurine that’s part of the set decoration. Sometimes it’s graffiti rabbit on a wall. Sometimes it’s the name of a character, which is the word rabbit in another language. But, I like to try to do that whenever I possibly can. Sometimes, they are very hidden so if you’ve been to some of my haunts in the past, you’ll probably never find them.

The truth is, I put them in a lot, so if you’re really looking, maybe that’s another thing you can do that each year you find a new way to incorporate a signature, like a character or a reference to one of the earliest characters that you’ve ever used. You know, say for example, like if you’re a theme park, like Knott’s Berry Farm, you find ways to incorporate the Green Witch, or you find ways to incorporate the Overlord, if you’re at one or the other Cedar Fair parks, whatever is right for you. But find a new way each year so that guests returning each year will have something new to look for. Does it help the haunt? Maybe, I think an argument can be made that it’s a good distraction, but more importantly, it gives people another reason to talk about your haunt and why it is cool, and why it’s so important.

Scott: So if you’d like to learn more about how I feel about haunted attractions, or really about themed entertainment in general, you can listen to my podcast, which is A Scott in the Dark Periodic Podcast for Haunters. You can read my books and yes, I have a few of them, or you can go to my website ScottSwenson.com and sign up for my monthly newsletter. Don’t panic, it only comes out once a month, so I won’t bug you all the time.